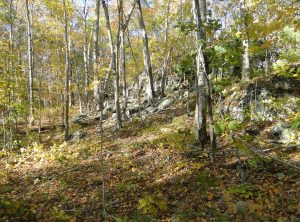 Gabbro Country– Album 3: Towards Lambert Ridge from the South

The underlying bedrock  of the TriTown Forest Preserve is Connecticut’s only major formation of Preston gabbro. formation). This an ancient igneous, mafic bedrock, with minerology closely akin to basalt, weathering into mineral-rich soils. Habitat at the base of gabbro cliffs is fed by mineral-rich seepage, and able to support “rich -site” plants. 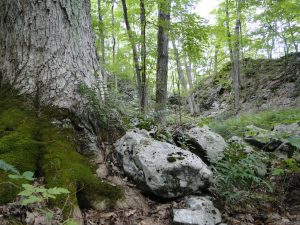 Due to their much greater age, the gabbro hills in the TriTown Forest Preserve and its surroundings are more severely weathered than the basalt and diabase ridges in the Metacomet Ridge. The low, flat-topped hills, blanketed with acidic glacial till,  have typical soil for the state’s eastern Highlands:  acidic and infertile, though rich in humus.  However, the higher hills still have areas with sub-acidic, base-rich soils, and groundwater seepage through gabbro soil parent materials is still calcium-rich, resulting in slope-base soils that are mineral-rich and circum-neutral. Gabbro ridges support localized  minerotrophic plant communities, comparable to those on traprock habitats in central Connecticut.   Although they may support unusual and uncommon plant species, gabbro habitats also support healthy populations of regionally common species, and the insect and wildlife populations that depend on them.

The summit/upper slope plant communities were a focus of a 2019 botanical study led by Carya Ecological Services and the CT Botanical Society. Certain dominant and characteristic plants were present on well-drained gabbro hilltops throughout the site, regardless of elevation. This includes Lambert Peak and the crest of Rixtown Mountain, both over 500 feet in elevation.  Well-drained upper slopes and plateaus, and foothills had a maximum height of 300 to 400 feet. These anchor species include pignut hickory, white oak, black oak, red cedar, sugar maple, Penn sedge, and heaths (black huckleberry and low blueberry).   The most diverse plant species assemblages were at the highest elevations and in cliff-base talus, which also supported massive sugar maples .

Shallow bedrock increases the frequency of tree blowdowns, regularly creating new openings, and helps to maintain high species diversity in summit habitats.  (Pickett & White, 1985)   Rocky summits usually have tawny patches with little blue stem grass.  Upper slopes usually have an open understory, with a “lawn” of Penn sedge, scattered maple leaf viburnum, and scattered large boulders.   Especially at the high elevations, many other wildflower and native grass and sedge species are interspersed.On level plateaus along the ridges, stunted trees and saplings are typically widely spaced within a broad, low patch of twiggy heaths, as shown in the  photo below. 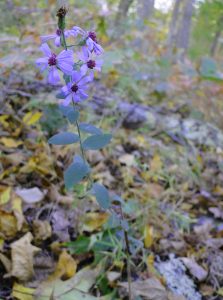 Moss and lichen flora are also important in sunny or partly shaded summit habitats.  Drought-tolerant mosses such as juniper haircap moss (Polytrichum juniperus) are early colonizers of bare, shallow soil, and help to build up organic matter levels. Hedwigia cilata, medusa moss, is a partially shade-tolerant moss found on a large boulder face.  Schistidium apocarpon (rock beard moss) is another boulder moss that tolerates dry conditions.  Crustose lichens are on exposed rock surfaces – boulders, cliff faces, and bedrock outcrops.  These include rock shields, in the Flavoparmelia and Xanthoparmela genera, and smaller species such as the smokey blue-eyed lichen, Porpidia albcaerulescens.  Lichen rhizoids which penetrate rock crevices, and secretions such as oxalic acid help to weather bedrock and release the minerals needed by plants.

Also encountered in open, sunlit gabbro summits are occasional plants, such as smartweeds, hawkweeds, fleabanes, common mullein, or hawk weeds, that are typically found, as well, on trailsides and other open disturbed areas.  Wavy-leaved aster is an example of a native aster found in two habitats: trailsides and gabbro summits.  Others  are  exotic species, but still useful for pollinators, and as seed producers for wildlife. They are poor competitors, but fecund, and able to colonize open, disturbed sites.

In this gabbro ridge system, invasive plant colonizers were absent or extremely sparse in 2019, after a very thorough invasive plant eradication program during the prior year. Mugwort would thrive on gabbro summits and rock outcrops but has not reached this preserve. With the steadily increasing usage of the preserve by hikers, annual early summer checks for mugwort seedlings are recommended, so they can be pulled before establishment of rhizomes that would sprout again, after pulling.